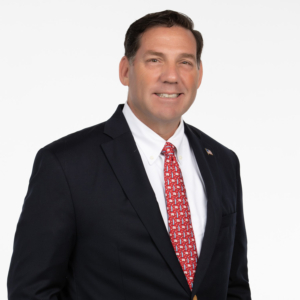 Newly remarried and “learning a lot” out on the political trail, John first came to Naples when his parents relocated to the city in 2003. He’s called Naples home since 2010.

Nearly all of his business career was spent as a road warrior with the global services and consulting giant Accenture. Getting involved with the Republican Party and becoming President of the Naples Republican Club (“I needed something to do”) was his first foray into politics. He says this experience piqued his interest in City Council. “I saw that they were having trouble getting things done and there was some angst. So, I thought maybe somebody like me, with my skills might help them figure it out. I spent two decades helping corporations decide where they wanted to go, how they were going to get there and what the implications would be. I think I can help the Council make a business plan and we’ll move forward from there together.”

If he were elected, he says he would be very future oriented. “I find what’s going on now to be past-present verses where we’re going.”

He cites the current approach to growth. As he sees it, there needs to be more proactivity. “The city has to prepare for the growth that is happening in the county. The city is a pinch point for people coming from Immokalee in the north and Collier Blvd. in the east and we haven’t done very much at all to plan for that growth. We should be going to the County and telling them this is what we want the edge of the city looking like, this is how we want this seam to come together.”

He’s also keen on re-structuring the way in which the city listens to residents, advocating the creation of neighborhood ‘prioritization committees,’ and of how the city minds its pennies: “I’d like to see the budget shift from a bottom up budget to a top down budget and I’d like to see more money carved off to strategic spending verses tactical spending.”

While John is on the outside looking in on some of the issues, he is quite certain on the importance of water quality to the city’s residents: “if you want to undermine the lifestyle in Naples just undermine the water.”

Having come up through public accounting and public consulting, John says he doesn’t know how to do anything that isn’t transparent. “Everyone will always know ‘why’ with me. If they want to debate it or talk to me about it, I’m always willing to listen, to change the shape of any argument or any business case. That’s what I view my job as and that’s what I think I can do better than everyone else.”

For more information on John: johndugan4naples.com