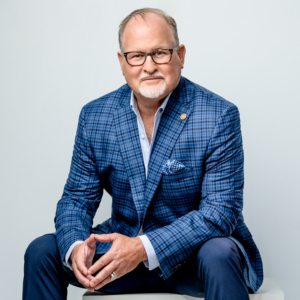 If there was one person in the world who could claim a median was the launchpad for a stint in the political arena, it would be Terry Hutchison. While the convenience store company 7-Eleven brought the native from Indiana initially to Venice, Florida in 2008, frequent visits to our city inspired Terry’s relocation here eight years ago. In 2016, Blue Zones Project Southwest Florida partnered with the City of Naples for a redevelopment project along Central Ave. Part of the improvements included the installation of a median. What was thought to be a great looking street project had unintended consequences for Terry’s business.

“The construction of a median negatively impacted numerous businesses including mine,” recalls Terry. It served as a blockade to what had been a simple turn into his store at the intersection of Central and US 41. “When I approached city council with my concerns nothing got addressed and I felt like there weren’t enough people on council with business experience to appreciate what we business owners were trying to say.”

Terry couldn’t beat them, so he joined them.

The Vice Mayor believes council has had great success addressing the city’s Vision since his election in 2018.

“I’m committed to not repeating mistakes from the past. By really paying attention to the details, I believe we can properly manage growth and not get into the situation of accelerating growth for growth’s sake.”

He voted against the Naples Beach Hotel redevelopment. “We had the right developers, but we didn’t have a strong enough conservation easement on the last large green space left in Naples. It just couldn’t get my vote.”

Championing responsible development such as the 10th street commercial corridor and the River Park community and protecting the environment, are priorities for Terry.

“Water quality is number one. If we compromise water quality, we are in serious danger in many different ways. We need to tackle the root causes of pollutants entering the lakes and stop compromising on adherence to stormwater codes by developers.”

He’s delighted for the residents of GSB that “we’ve finally got to the point where action is being taken on the repairs to the seawall and sidewalks” along Venetian Bay. However, he says we must remain vigilant about efforts to construct a cell tower in the neighborhood. “Verizon may have backed off, but Crown Castle is moving forward very aggressively” with an installation at 3rd Street South.

While acknowledging council meetings may seem endless, they are necessary. “For many years council did not dedicate the time to the issues and important decisions were deferred. So careful, sometimes intense and lengthy deliberations are needed to shape the right decisions and the needed reforms.”

For more information on Terry: hutchison4naples.com