Naples City Councilors have given the green light to “keep moving forward” with plans to rebuild Naples Pier “better and stronger” and possibly higher.

The iconic landmark, which was once the primary arrival and departure terminal for tourists flocking to ‘the City on the Gulf’, suffered major structural damage from Hurricane Ian. 30% of the pier was swept away or now lies underwater. 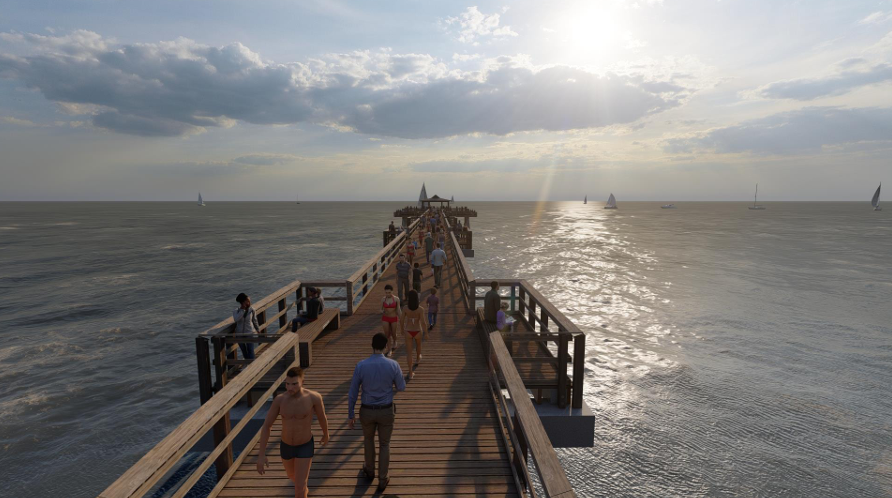 The last time the wharf was reconstructed was following Hurricane Donna in 1960. Since then, numerous repairs have taken place, but the substructure and pilings are now 30 years old and reaching the end of useful life.

Following Ian, the City engaged marine consultant engineers Turrell, Hall & Associates to assess the damage caused by the historic storm. They presented two options at the Council meeting on December 7, 2022: repair the 1000ft timber structure; or replace and rebuild slightly higher, using innovative techniques and materials to make it more robust. Councilors opted for the latter. They unanimously endorsed THA’s opinion that it was more sensible and cost-effective to “start from scratch” rather than “band-aid what’s left.”

While no budget has yet been set, the structure was insured and additional funding from FEMA could come into play. Even so, as City Manager Jay Boodheshwar noted, finding the backing for “a landmark so close to the heart of the community” should not present too much of a challenge. He’s already had multiple calls and emails on the subject. “There are residents ready to write checks,” he noted.

“Permission to proceed to replace the pier in the existing footprint has already been granted by the Army Corps of Engineers. Permitting from DEP will be applied for when the time comes,” says Parks, Recreation and Facilities Director Chad Merritt, who is spearheading the multi-phased venture. He says the intent is to get rebuilding started immediately and then incorporate modifications further down the line.

Boodheshwar called the approach “perfect” and noted “there are all kinds of guidelines to follow and multiple things on parallel paths.” Once the public has the opportunity to weigh in on design enhancements, “we will have a better idea of what the pier will look like and how it will take shape.”

None of THA’s design features, such as raised gazebos, increased seating and shaded areas, bench area bump outs, or even a height increase of 3 feet “are set in stone” said Tim Hall of THA. “The direction we were given was to get Council’s consensus to rebuild,” but also to “put some ideas in front of you.”

Preserving historical elements, while also making the pier more functional would most likely be the order of the day but for now, as THA’s chief engineer, Josh Maxwell, emphasized, “getting the public back on the water is the priority.”

Merritt also confirmed that a Request for Qualifications was issued on January 9. The RFQ is a State requirement to seek qualifications from design consultants who would be responsible for providing permitting, engineering, and architectural services for the new pier.