Hail to the Chief

As we approach the end of another season, it would be fitting to acknowledge and thank an individual who has contributed so much to our health, safety, and well-being during the past twelve months, the City of Naples Fire Rescue Chief Pete DiMaria. The Chief also holds the title of Emergency Manager for the City and with that title, he is responsible for managing all COVID-19 related activities.

I sat down with the Chief one recent morning to learn more about the last year as well as his career in the City of Naples Fire Department. 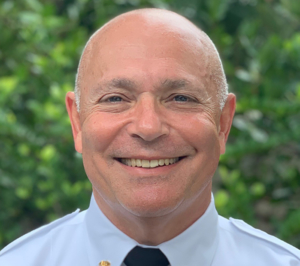 The Chief’s story began when he was an eleven-year-old boy living in Broward County, Florida. His family’s home caught fire and his mom, brother, sister, and grandfather perished that day, needless to say, this tragic incident shaped Pete’s life.

When he graduated from school, he accepted a job in the construction industry, he immediately became friendly with another young man who was a fireman full time and worked construction part-time. It so happened that this young man’s dad was head of the Fire Training Academy in Broward County. This gentleman assisted Pete in getting into the academy, where he graduated as a top recruit and started looking for a job. Soon after graduation he interviewed to become a fireman in Naples and was hired in 1989. He immediately fell in love with his job and the City of Naples where he has had a distinguished thirty-two-year career in the Fire Department, five as Chief.

“Chief Pete” as he is fondly known at the firehouse, when asked what his greatest challenge has been, he not surprisingly responded, being in charge of the COVID-19 response.

The Chief realized early on that he was dealing with a big problem so he immediately placed an order for additional PPE (gloves, masks, gowns) knowing that within days they would be in short supply. His next step was to recommend the cancellation of large group events such as the St. Patrick’s Day Parade and the July Fourth Fireworks. Although these decisions would not be popular, they needed to be made to control the spread of covid-19. He then advocated for a city mask mandate that City Council put into place last year. The Chief’s biggest success in battling COVID-19 was getting the Collier County Department of Health to agree to allow the City of Naples Fire Department to administer vaccinations at Fire Station 1.

Late in January, on the first day that phone lines opened for vaccination appointments, there were 500,000 phone calls over the first 15 minutes for the 200 available shots. Chief Pete acknowledges, they were crazy days. Over the last three months, the City slowly started receiving larger quantities of vaccines. Since that first day, Chief Pete and his team have administered approximately 9,000 shots in the arm, an amazing accomplishment that certainly saved lives.

“GSAC‘s various communications to spread the word about the availability of vaccinations at the City Fire Department resulted in nearly 450 GSBN residents obtaining an appointment. We received over 1,000 emails of praise and appreciation for Chief Pete and the entire department for their care and professionalism in setting appointments and giving the shots. Our heartfelt thanks for an exceedingly difficult job exceedingly well done,” said David Feight, president of the GSAC Board of Directors.

If you are still in need of vaccination the Chief suggests you log on to Naplesgov.com, click on the COVID-19 link for updates and directions as to how to reserve your day and time. 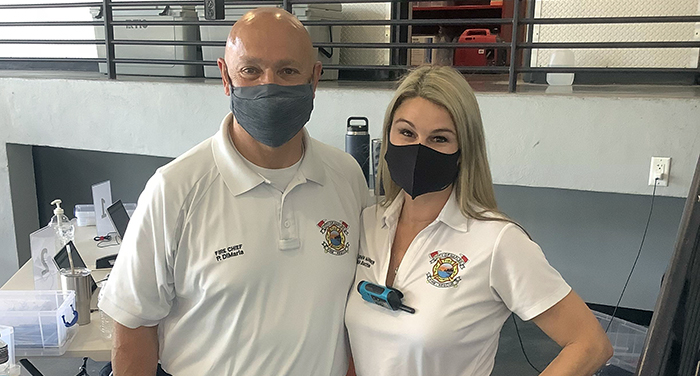 During his five years as Chief, Pete has many other accomplishments, the one he is most proud of is receiving the Collier County Distinguished Public Safety Award in 2015.

In 2019, he oversaw the planning and opening of the $11 million, state-of-the-art Fire Station 1 and Emergency Operation Center.

He also secured a Class 1 rating by ISO (Insurance Service Organization) for the City, which is only achieved by one percent of communities in the US. The City was evaluated by emergency response times, water distribution, equipment, and dispatch center. Be sure to inform your homeowner’s insurance of this rating since it should provide you with a preferred rate.

I have to say that after spending a morning with Chief DiMaria, I am humbled by his achievements as a professional and as an individual. During my time at the firehouse, all I saw were happy, energetic staff with and can-do attitude. The Chief is truly a special man, and we are lucky to have him!

His parting words to me were wash your hands, socially distance, wear a mask, it’s not over yet!